Texas Instrument manufactures an integrated BLE chip called CC2540. This chip contains not only the bluetooth LE radio, but also programmable 8051 core. They provide complete development tools, and they come in two forms:

The larger of the devkit CC2540DK contains general-purpose development / evaluation board called SmartRF05EB. These boards are also used for their line of wireless modules created by ChipCon (subsidiary of TI). As such, it’s compatible with other wireless evaluation modules CCxxxx.

The CC2540DK kit comes with two CC2540EM evaluation modules  and two SmartRF05EB  boards. The SmartRF05EB contains lots of peripherals such as LCD, Joystick, LEDs, Potentiometer, switches, etc.. In addition, it has necessary components to flash and debug the target chip. The target chip is any compatible CC device as previously mentioned, which is surface mounted onto the evaluation module PCBs.

A noteworthy aspects about this kit

In order to test out different examples provided with TI’s ble stack download, several other tools need to be setup:

As for this writing, this is the only dev kit that provides both the hardware and the necessary software stack to test out BLE functionality in a single package. The only downside is that the software stack is written only for IAR Workbench, which requires license to create compiled hex beyond 4Kb (free version limit). We would love to see an opensource version of the software stack written for compilers such as SDCC.

There are 2 variants of CC2540 : CC2540F128, CC2540F256. The only different between the two is the flash space as the name indicates. (128kB vs 256kB). This chip has all major peripherals and hardware capability of modern microcontrollers, as you can see from the functional diagram below. Some highlights: 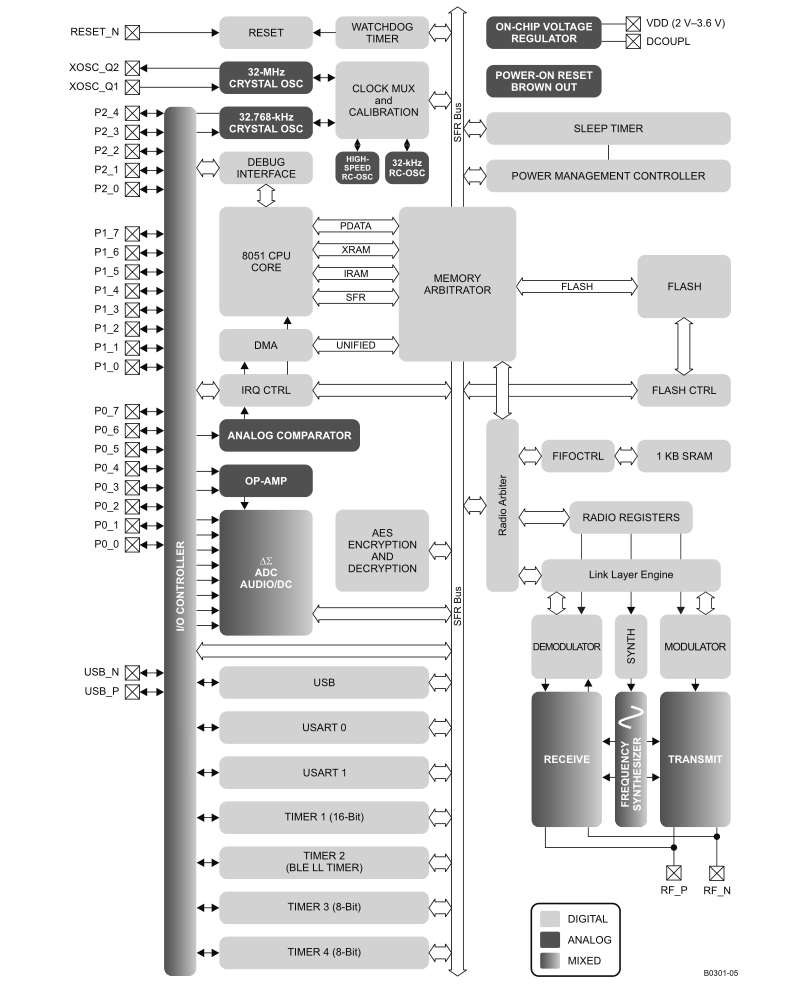 Next, the CC2540′s pin labels in the current package: 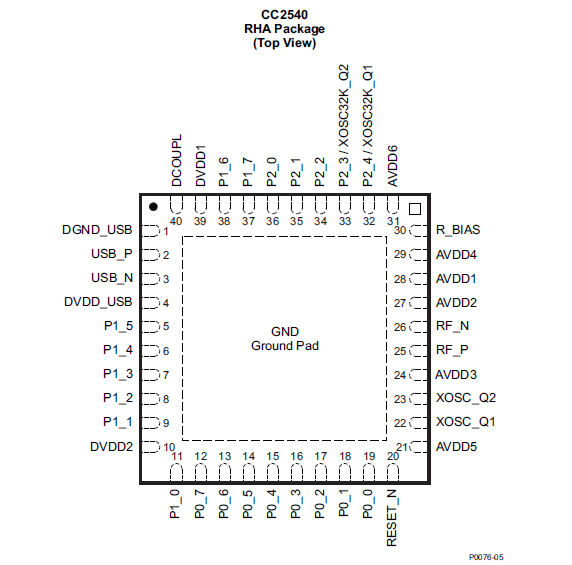 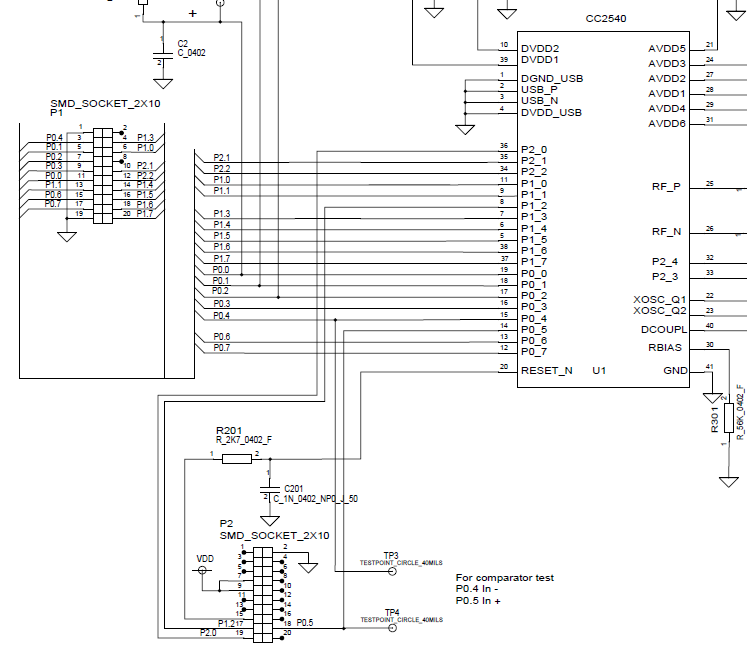 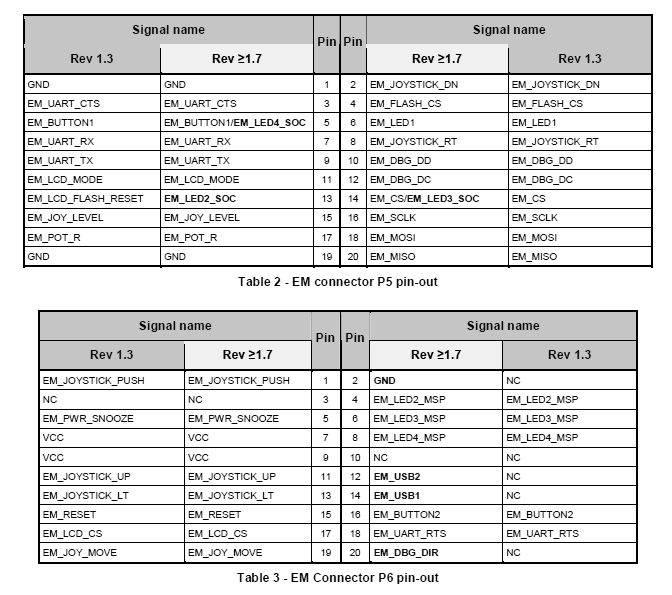 The probe connectors give access to these pins, but the mapping from the EM -> Probe pinouts are not straight forward. The probe pin mapping is as follows: 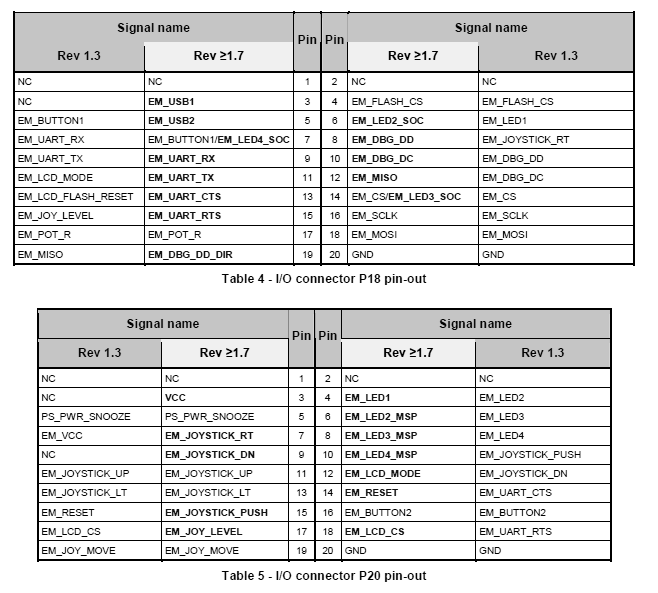 To access a specific pin on from CC2540, we need to do a little mapping of the ports specified from the tables shown above. For example, the IO pin P0.1 from CC2540 corresponds to EM_BUTTON1/EM_LED4_SOC at EM connector pin 5. The same pin corresponds to  the pin 7 on the prob connector. I wish the mapping of the pins from the debug headers to the actual chip was more straight forward. I had to trudge through 3 different technical documentations to find this.

I’ll be connecting the pulsesensor to pin P0.7, which corresponds to EM_POT_R (potentiometer) on pin 17 @ P5 on the EM connector and pin 17 @ P18 on the probe connector. In order to disable the onboard potentiometer, I needed to take the jumper off on connector P10 on SmartRF05EB, at position 33-34. The connector P10 is where you can sever or link each individual peripheral that connects to the evaluation board housing CC2540.

The latest 3D CAD images from our first prototype. From the PCB to the enclosure.

Vote for your Device

What device should the factory make first? Consumer or hacker? We’ll let you help us decide…